15-MINUTE CITY AT A GLANCE

The 15-minute city is a term coined in 2016 by Carlos Moreno, scientific director and professor specialising in complex systems and innovation at University of Paris 1 Panthéon-Sorbonne.

The term covers an urban theory and an urban model that cities can use to ensure that all residents are able to access their daily needs (work, housing, food, health, education, and culture and leisure) within the distance of a 15-minute walk or bike ride.

The model has been adopted by several cities around the world, most notably in Paris where mayor Anne Hidalgo collaborated with Carlos Moreno and made it part of her re-election campaign in 2020. In 2020, C40 Cities promoted the 15-minute city idea as a blueprint for post-COVID-19 recovery.

What is the 15-minute city?

The 15-minute city is a new urban model that promotes a human-centric and environmentally sustainable urban future.

The idea at its core is that cities should be designed – or redesigned – so that residents of all ages, backgrounds, and abilities in all parts of the city are able to access their daily needs (housing, work, food, health, education, and culture and leisure) within the distance of a 15- minute walk or bike ride.

The model supports a decentralised city and a modal shift away from private vehicles, which at the same time reduces the use of fossil fuels and increases the quality of life for citizens.

The model does not call for a return to village life, however. Instead, the 15-minute city is a decidedly urban theory that heralds urban life with all its advantages: vibrancy, creativity, diversity, innovation, active citizenship, and technology used for the common good. The 15- minute city model reintroduces the qualities of older cities, adapted to contemporary lifestyles.

The 15-minute city is based on universal human needs and is flexible enough to work in all cities regardless of size, geographical and cultural differences. It can also be applied both when redesigning existing cities as well as in the planning of new cities or urban areas. In addition, the model is easily translatable to specific urban policies and encourages citizen participation and cross-disciplinary action between architects, landscape architects, urban planners, other professionals, politicians, businesses, developers, and owners.

The decentralised, polycentric, and multi-service 15-minute city promotes the common good to guarantee a city for all and avoid gentrification. 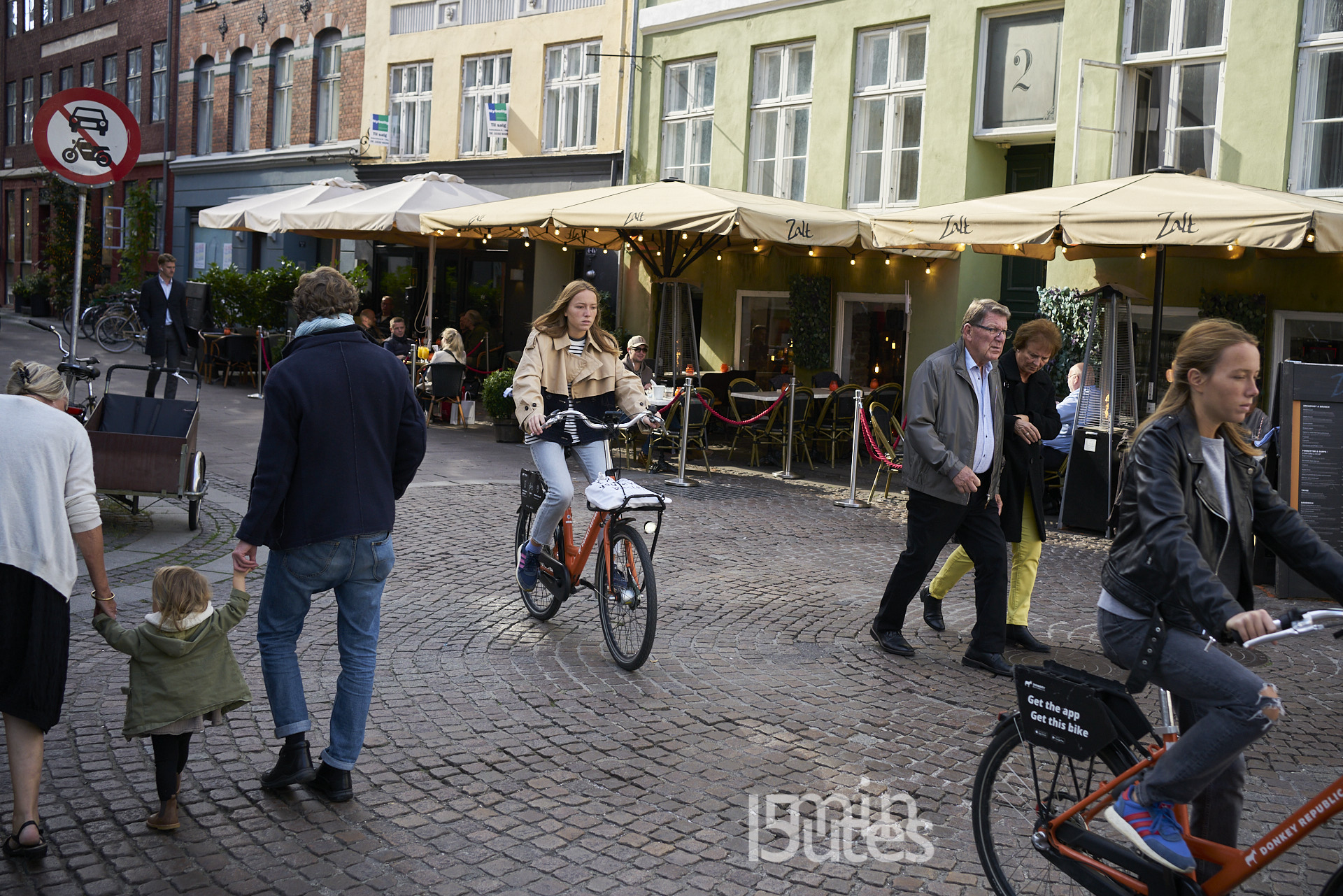 Benefits of the 15-minute city 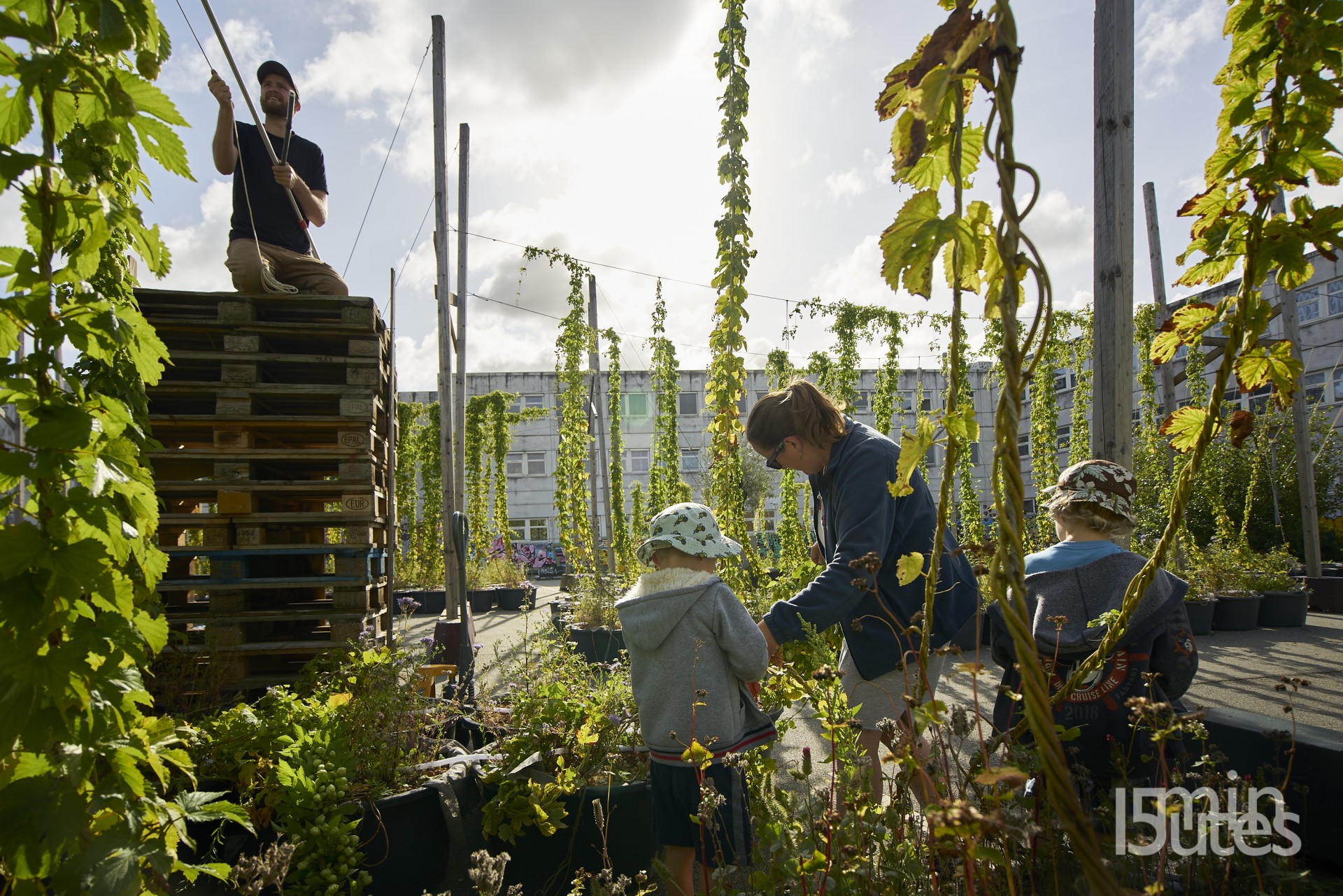 The relevance of, and the urgent need for, a new urban model

The 15-minute city breaks with the primacy of the car and the dysfunctional urban patterns brought about through decades of large-scale modern urban planning. For too long, people have accepted the dysfunctions and indignities of modern cities and adapted to the absurd organisation and long distances of most of today’s cities, says Moreno in his TED talk.

“It’s funny if you think of it: the way many modern cities are designed is often determined by the imperative to save time, and yet so much time is lost to commuting, sitting in traffic jams, driving to a mall, in a bubble of illusory acceleration,” he says.

Many of the qualities of the 15-minute city were the norm before cars became dominant, and cities were divided into disconnected areas reserved for each their purpose: residential areas separated from retail, businesses, industry, and entertainment. This urban planning regime has increased transport time and transport emissions and intensified the stress on the environment.

COVID-19 and the lockdowns of the world’s cities has made people appreciate even more the value of walkable, local public space and has highlighted the need to imagine a more attractive and sustainable urban future.

How the model differs from similar theories

The 15-minute city shares ideas with other urban theories, such as Jane Jacobs’ thoughts on urban life and the Nobel Prize-winning economist Elinor Ostrom’s work on governing the commons, as well as other people-centric approaches. However, the 15-minute city also responds to new challenges such as climate change, COVID-19, and globalisation – and their potentials. The 15-minute city embraces changes in life and workstyles as well as new technology and innovations such as electric mobility, digitalisation, and the sharing economy. Furthermore, the 15-minute city includes cultural and social needs and environmental concerns.

Contrary to many urban theories, the 15-minute city is free of political ideology and attitudes towards the aesthetics of the architecture and refrains from specific instructions on urban space design. The 15-minute city merely defines a number of universal human needs and functions and the desirable distance to them, and in this way, it is easily adaptable to all cities. 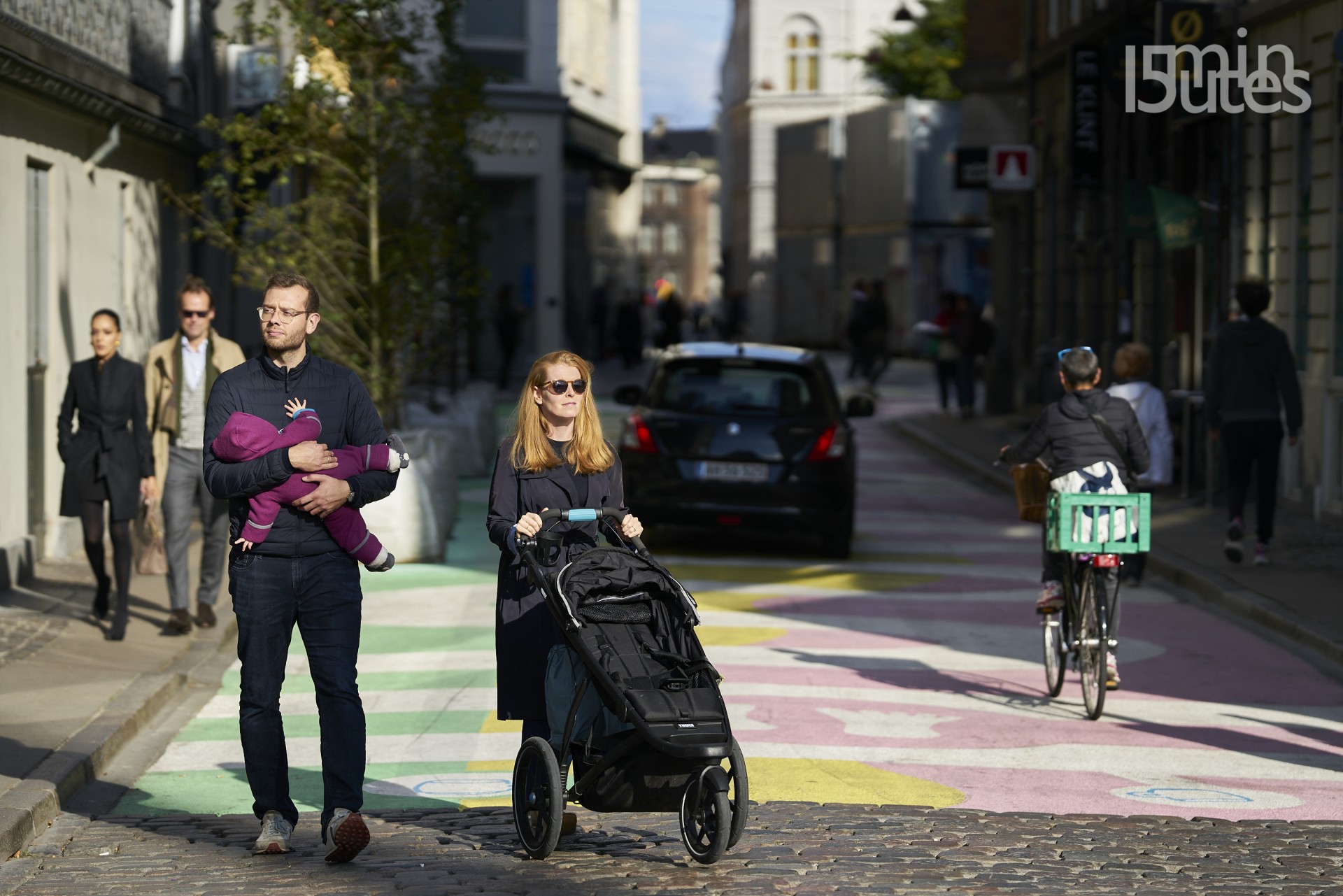 The 15-minute model in detail

The 15-minute city is based on six essential human needs, three goals or features, and four guiding principles, as defined by Carlos Moreno.

The six essential urban social functions that are needed in all cities:

The three key features that define a good city:

The four guiding principles that are the key building blocks to design the 15-minute city:

The C40 Cities, a network of the world’s metropolises committed to addressing climate change, has used the 15-minute city model to define more concrete solutions: 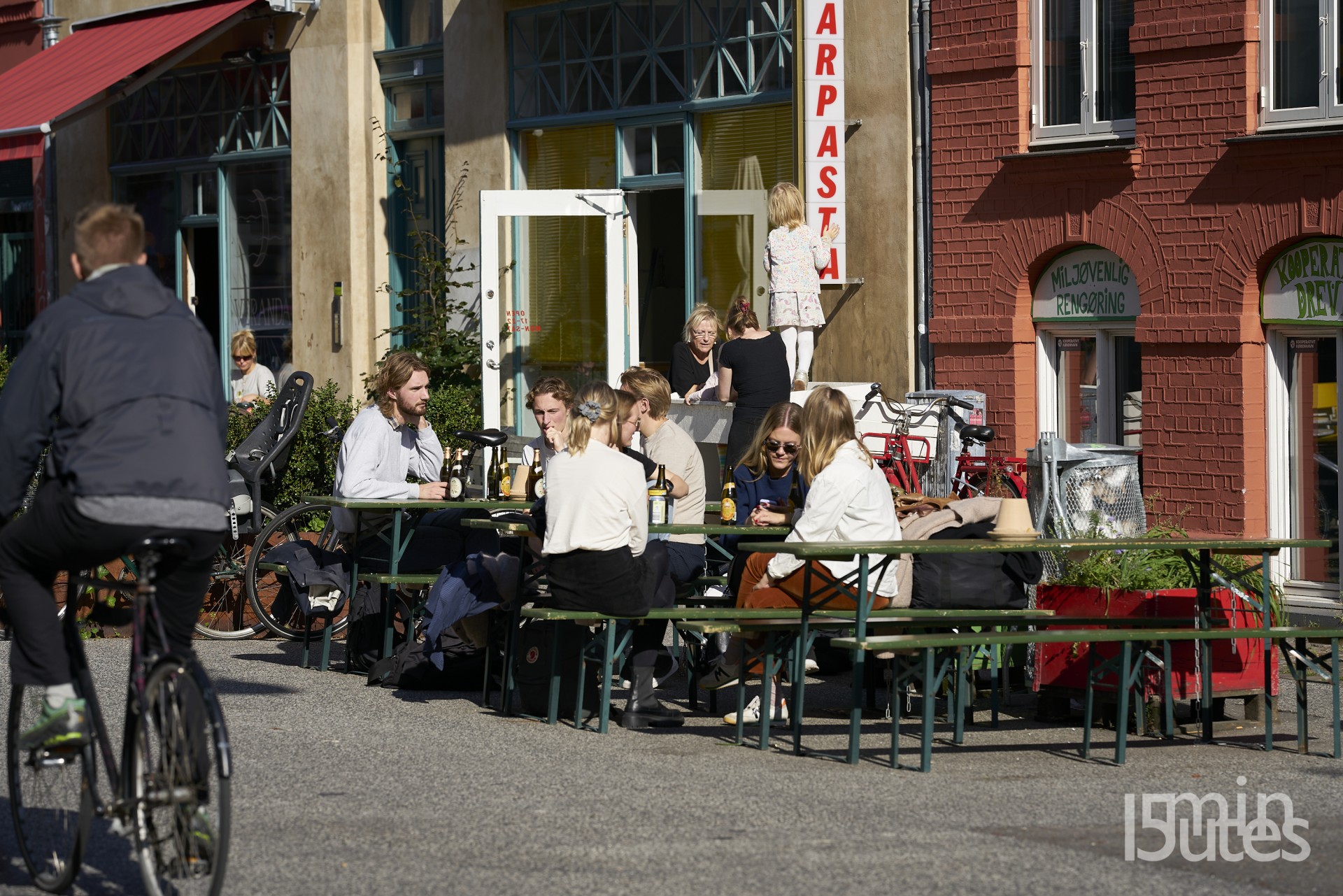 The adoption of the model worldwide – a global movement

The 15-minute city model has proved easy to translate from theory into urban policy and into political programmes that resonate with citizens. From Paris to Houston, Milan, Brussel, Valencia, Chengdu, and Melbourne, the ideas behind the 15-minute city have been implemented in cities with great success, generating a global movement.

Dublin, Ottawa, Busan and Seattle are among those to have declared plan to implement the approach. 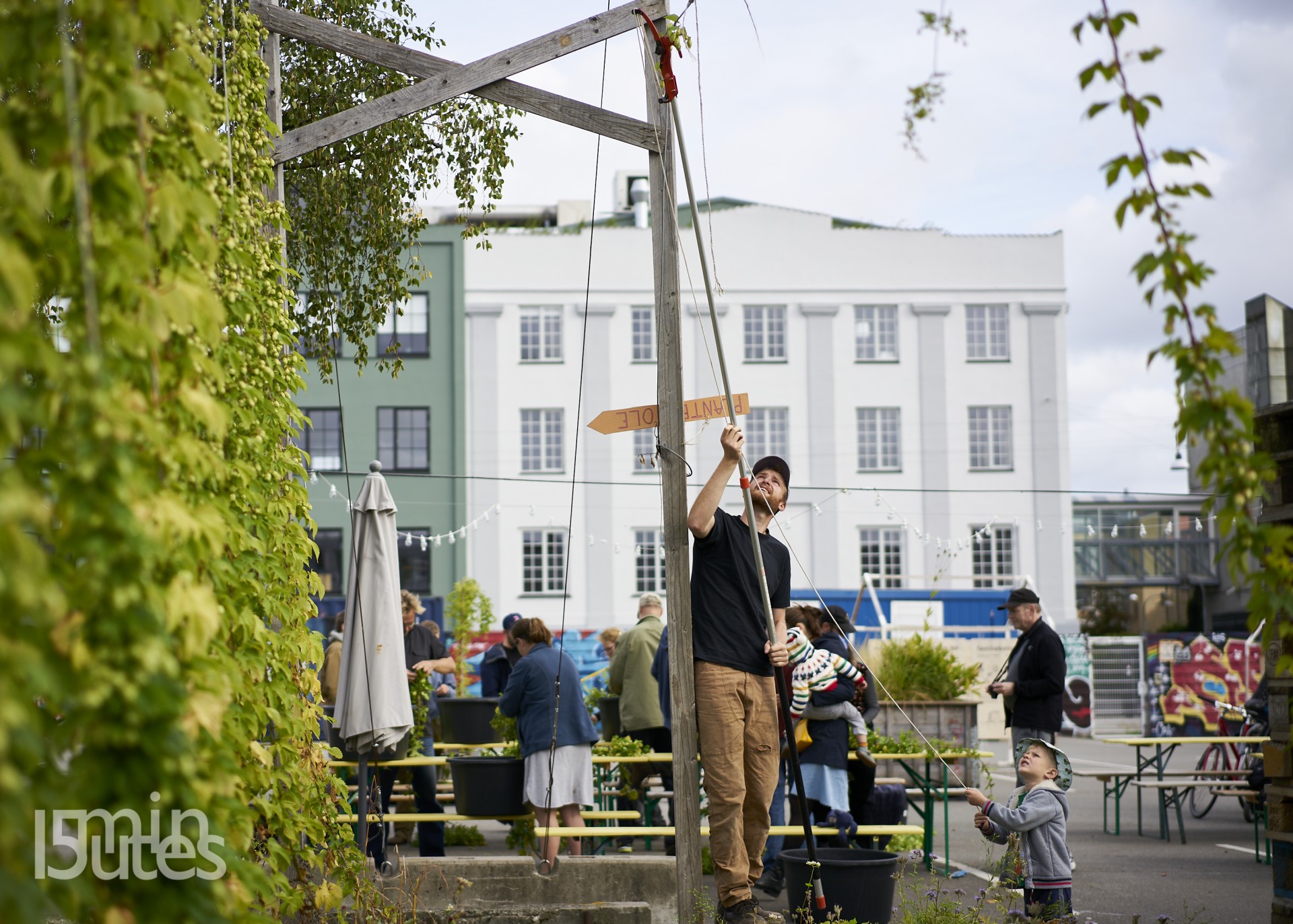 Critics have pointed out that the model could lead to increased marginalisation of disadvantaged neighbourhoods. However, this can be avoided by focusing first on underserved areas of the city when implementing the 15-minute city model. The management of resources with an urban policy based on the urban commons is essential for a 15-minute city for all.